It"s this morning, at opening of the Cannes Yachting Festival, that this information was filtered, unveiling a 18 months long collaboration between the manufacturer of aluminium-rigid inflatable boats and the British skipper's technical team, which concluded in the developing of a fairly exceptional unit. 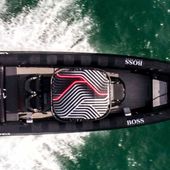 Cannes Yachting Festival : motoryachts and powerboats at the Vieux Port