It will be the first new product in a year for the shipyard in La Rochelle, a subsidiary of the Fountaine-Pajot Group specialising in monohull sailing yachts. In September 2019, Dufour Yachts announced the launch of 4 new monohull yacht models within two years, the Dufour 530 being the first of them. The Dufour 61 is the second of these new models, which will be presented next January at the Boot in Düsseldorf, just one year after the Dufour 530...

This new model will have the difficult task of making people forget the commercial failure of its predecessor, the Dufour 63 Exclusive, which proved difficult to launch on the Boot 2017, and which never managed to reach the sales levels of competitors such as Bénéteau's Oceanis Yacht 62, or the Jeanneau Yachts 64, which totally dominate this market segment.

Looking at the characteristics of the 61, there are strong similarities between the 61 and the 63 Exclusive, which we imagine is a big vintage, namely a partial refit, the hull of the 63 Exclusive having - logically - been retained, for cost reasons.

In fact, the Dufour 61 should be presented as an evolution of the 63 Exclusive, integrating additions discovered on the Dufour 530, which is a good thing in itself.

Most of the changes focus on the interior of the boat, with a totally overhauled layout, integrating either a galley offset forward of the saloon - a very good idea - or a side galley aft, to adapt to everyone's wishes, and the abandonment of the vast owner's suite at the rear of the boat - à la Hallberg-Rassy or Amel - which is logically located at the balance point of the hull - in favour of a more conventional layout.

The Dufour 61 offers 3 types of accommodation, in 3 or 4 cabins, with the possibility of installing a skipper's cabin in the forepeak, to the detriment of the sail locker.

The deck layout of the Dufour 61 is based on that of the 63 Exclusive, with one less access to the bathing platform. This deck layout was rather successful, uncluttered, and was characterised by German-style helm stations, with all manoeuvres carried out there for the greatest comfort of the skipper, and guests from elsewhere ! 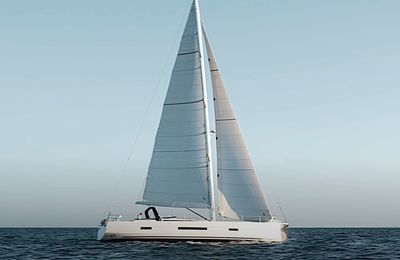