A year ago, the Slovenian shipyard SVP Yachts (Greenline) launched NEO, a range of 3 outboard boats with revolutionary deck layout - true crossovers - imagined by the J&J cabinet, offering a great modularity of layout. This range has just been sold to the German company Bavaria, which is short of outboard boats. As soon as the Boot Düsseldorf 2020 opened, it was said that Bavaria would announce at the end of the show the off-the-shelf purchase of an outboard model, in order to enter as soon as possible a market where the German yard was cruelly absent. This announcement was delayed in order not to compete too much with the two new models presented by the shipyard on the Boot, namely the C42 sailboat and the SR41 inboard Express Cruiser.

It turns out that it is with the Slovenian Greenline that the agreement was concluded, for the outright sale of the NEO range, a range of 3 outboard models, declined around the same hull length of 10.99m.

While it is easy to understand why Bavaria is making a good deal - the NEO is a well born model full of good tricks - the question arises as to Greenline's decision to sell this recent range, which perfectly complemented its hybrid and classic inboard offer.

Positioned since its creation on responsible boating by having from its creation proposed hybrid engines on very specific hulls called hyper-displacement, the Greenline brand seemed little legitimate to sell this petrol outboard offer, little in relation to its positioning. In fact, the launch of a specific brand would undoubtedly have made things easier, which was not part of the manufacturer's strategy, in full optimisation of its production capacities to meet the strong demand encountered by its largest models.

Analysis - this sale seems to be a win-win agreement between Greenline, which has little legitimacy on the petrol outboard market and is struggling to find production capacity for its highly successful 40-foot range, and Bavaria, which was desperately short of outboard models. On Bavaria's side, the launch of the new outboard range is planned this year (production will start in September in Giebelstadt), knowing that the models (2x300hp) should be modified, to lower the selling price and to accommodate a second central and traversing cabin. 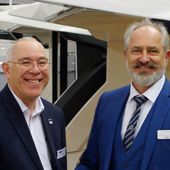 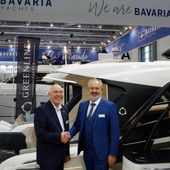