Chris Doscher is a graduate of Kent State University where he studied Aviation Management. His first love was of sailing, and he grew up sailing on Barnegat Bay at Island Heights Yacht Club.

Driven by his appetite for excellence in competition, he participated in the 1980, 1984, 1988 and 1992 Olympic campaigns in the 470 class. Still seeking the thrill of competitive sailboat racing, he co-owned and campaigned Mumm 30 Xisled with Barry Carroll and Mark Ploch. From 2000 to 2004, he owned and campaigned his Farr 40 named “Twisted” earning multiple wins including trophies in the Southern Ocean Racing Conference (SORC).

From 2004 to 2012, Doscher raced on “Titan” with Tom and Dottie Hill from San Juan as the main trimmer and helmsman. All of this was just for fun in his “spare time." Chris Doscher began his private aviation charter company in 1986 which grew to employ over 400 professionals with a fleet of 40 jets worldwide.

He sold the company in 2000 to Berkshire Hathaway. Longing to conquer new challenges in the marine world, Chris Doscher became the sailboat sales manager for Beneteau in North America.

“I am humbled by this opportunity to be part of a first-class organization with proven professionals building and bringing to market a fast, luxurious and truly remarkable product offering. This is evidenced by multiple Boat of the Year awards from SAIL Magazine, Cruising World Magazine and Sailing World Magazine in 2018.  I believe my past experiences are a culmination of preparation to lead Hudson Yacht Group in becoming a greater influence in the marine industry worldwide,” Chris said.

Hudson Yacht Group offers semi-custom and production yachts unlike anything on the market thanks to an unmatched combination of strengths including an award winning design group, a master boat building team, the credibility and longevity of a manufacturing powerhouse, and an intricate network of the world's best sales and service professionals. 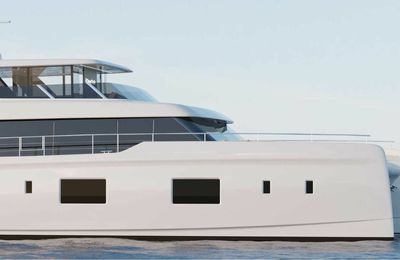