Oceanco announces that the 90m DAR, our latest delivery, has won both the 2018 Monaco Yacht Show Best Exterior Design and the Finest New Superyacht Award. The Monaco Yacht Show is the premier Superyacht Show in the world. Every year over 120 superyachts are on display, 40 of which are new launches or worldwide debut yachts. The award ceremony took place the night before the show opened on Tuesday, September 25th at the Le Méridien Beach Plaza. On stage to receive the honors were Oceanco along with Luiz DeBasto Design himself and Valentina Zannier from Nuvolari Lenard.

DAR has a modern revolutionary exterior styling by DeBasto Design and sophisticated interior design by Nuvolari Lenard. Her groundbreaking design and technological advances bear the unmistakable DNA of an Oceanco: she reflects the latest advances in glass technology and is the first yacht in the Netherlands to be given the official Lloyd's Register Integrated Bridge System (IBS) notation and designation.

DAR features a superstructure completely finished in reflective glass. From the interior, the glass yields panoramic floor-to-ceiling views aft, port and starboard. Her design was conceived to maximize opportunities for outdoor living and to have direct contact with the marine environment. While the yacht yields a massive amount of volume, DeBasto has ensured that the profile remains long, sporty and lean without a top- heavy superstructure that characterizes so many very large superyachts. The interior, by Nuvolari Lenard was designed in concert with the exterior concept and is also modern and rich in contemporary textures. 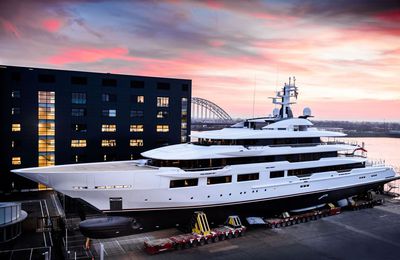