Since its launch just over two years ago, Fairline Yachts has been winning awards for its new models. The new Targa 43, which recently launched at Cannes Yachting Festival, last week followed in the footsteps of its larger sister, the Targa 63 GTO, by winning the ‘Best Exterior Design’ Award at the World Yacht Trophies in Cannes - two new models, two awards, two years in a row gives deserved recognition for the hard work in phase one of Fairline’s business plan. As the business enters phase two of its plans - which involves the launch of the exciting new F-Line 33, the launch of the Squadron 64 and continued investment in production, including the new Fairline Marine Park facility in Hythe, Southampton - the company announces the appointment of David Tydeman as its Executive Chairman.

David is well known in the UK marine industry and brings a wealth of relevant experience to the senior team - his deep knowledge of the UK boat building industry, the South Coast work force and its supply chain will help lead Fairline’s strategy for the new Southampton site. David is credited with taking Oyster Yachts into the superyacht sector, with 80% of all Oysters over 80ft secured under his leadership since 2008. He is well placed to guide the board with the investment decisions necessary for Fairline Yachts to enter the larger boat market. 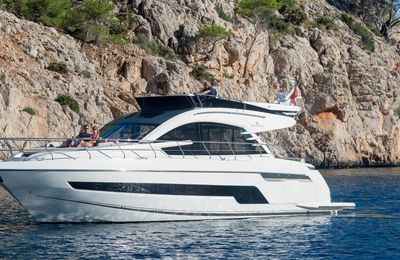