The Anglo-Maltese investment fund Hanover Investors has just taken control of the troubled British shipyard Fairline Yachts, for an undisclosed amount. The amount of the debts?

Life is not easy for all shipyards, even those positioned in the luxury motor yacht market, as the British company Fairline Yachts has once again demonstrated.

In 5 years, Fairline Yachts welcomes its 3rd savior, with the arrival of the investment fund Hanover Investors, a fund specialized in turning around companies, in short, restructuring them in order to resell them at a margin.

Four years ago, in 2016, Fairline Yachts was already in the midst of a rout, which had welcomed to its capital, in January, a mysterious Russian investor. The objective announced in February was to triple the shipyard's production, which had fallen to 30 units in 2016, a very meager level for a shipyard that at the height of its glory produced up to 300 motoryachts.

The strategy was to move upmarket, and no doubt to stop selling at a loss its Squadron 78, the flagship model that was sold off at the time, and which led to the bankruptcy of the shipyard, the last of which fell off the production line in 2018.

On June 5, 2020, Fairline Yachts, heavily impacted by the crisis covid, announced 240 job cuts, after a first wave in September 2019 (40 jobs), on its two industrial sites in Peterborough, that is to say nearly 50% of its workforce....

As much as to say that the company was once again on the verge of collapse, when the investment fund RiverRock took a majority stake in the capital, the Russian funds having proved less important than anticipated.

Will it be the right one?

Hanover Investors has positions mainly in the software market, in particular for distribution, but also in chemical testing and analysis tools.

Yachting seems to be its first investment in the manufacturing industry, a very specific sector in terms of its WCR variation and cash flow cycles.

It will therefore be interesting to discover the strategy deployed by Hanover Investors, whose advisor, Jason Carley, knows Fairline Yachts well, having been its president for the past year, through his position as senior portfolio manager at RiverRock.

In concrete terms, Fairline Yachts has been taken over by the Hanover Active Equity Fund II, whose objective is to turn around companies in difficulty and accelerate their internationalization.

It should be noted that Hanover Investors has a second fund, Hanover Catalyst Fund (HCF), whose objective is to make long-term investments in companies with high potential... 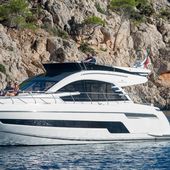