Lagoon 42, a catamaran that adapts to her owner!

Clifford Clarke, who became quadriplegic as a result of an accident, has recently taken delivery of his new Lagoon 42. 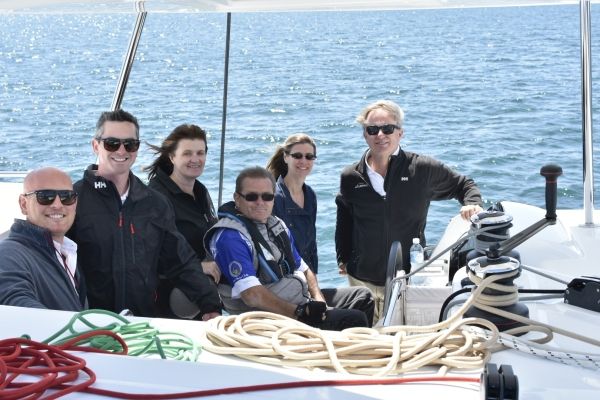 A keen sportsman, who took part in the Paralympic Games in the Australian rugby team, Clifford Clarke refuses to let his wheelchair prevent him from living his life to the full.

For him, the sea and the freedom that it provides was a real eye-opener!

After measuring his wheelchair, Clifford Clarke compared all the 42-foot catamarans available on the market.

He wanted to determine whether there was enough room to move around on deck, in the cockpit and around the galley while remaining in his wheelchair. He realised then that the Lagoon 42 was the only catamaran in her class that was sufficiently beamy and spacious to allow him total freedom both above deck and in the saloon and the cabins.

It was the Australian distributor The Multihull Group that worked on the changes to be made to the boat, including the installation of a lift for easy access to the starboard hull.

Clifford already has a goal of sailing away and enjoying the beautiful Whitsunday Islands and then heading north towards Cairns. He also plans to take part in the Sail Indonesia Rally to be held in 2018.

Prestige M48 - new visuals of the Prestige Yachts motoryacht catamaran
« Previous post With a choice between an outboard or inboard engine, the new Four Winns HD 220 wants to seduce all boaters! Next post » EPower, an innovation in Yacht Financing by Simpson Marine