After a day of climbing to the west, the leaders of the Transat Jacques Vabre tacked last night. In powerful conditions, the Ultime, Multi 50 and Imoca are back a direct route at sustained speeds in stable north-westerlies. Behind them, the Class40 have left the tip of Brittany and crossed the front this morning. Some boats are nursing damage, some are laying low - two have made stopovers at Camaret-sur-Mer. But overall, the fleet is preserved.

Ultime
Maxi Edmond de Rothschild powered through the front and pointed its bows towards Salvador de Bahia at around 20:00 UTC last night. “We crossed the front in two hours, that's the advantage of the multihull,” Sébastien Josse told the race radio this morning. He and his team-mate, Thomas Rouxel, still have a grip on the race. Averaging more than 30 knots on more smoothly rolling sea, they have increased their lead to 50 miles over Sodebo Ultim’. Maxi80 Prince de Bretagne was making half the speed, which was explained when the duo Lionel Lemonchois and Bernard Stamm informed their technical team this morning that had broken their mainsail halyard while crossing the front, last night. They are already over 250 miles behind. One of the pair will have to climb the mast to make the repair and for that they will have to wait until the sea-state is calmer.

Multi 50
Arkema continues to set the pace even if Lalou Roucayrol admitted to having been "forced to slow down just before crossing the front where we actually flew several times.” The question of the day is whether or not Réauté Chocolat, who dodged the worst of the cold front by diving to the South at the cost of multiple manoeuvres, will be able to minimize its losses? Skippers Armel Tripon and Vincent Barnaud have slipped from second to fourth, and were sailing at a speed two times lower than Arkema. We will know by the afternoon. Ciela Village (Thierry Bouchard and Oliver Krauss) and FenêtreA-Mix Buffet (Erwan Le Roux and Vincent Riou) are less than 30 miles from the leader on the same angle.

Imoca
Positioned furthest north of the Imocas, Jean Pierre Dick and Yann Eliès on St-Michel Virbac caught the wind rotation to the northwest first. In strong, reaching conditions, the favourites have extended their lead to over 20 miles over the continually impressive foil-less SMA (Meilhat-Gahinet), who seem to be holding off the more modern foiling boats behind them. The battle of the Azores is just beginning and St-Michel Virbac, making 18.5 knots is neck-and-neck with the leading Multi 50, Arkema, with the two fleets intertwined.

Class40
Anglo-Spanish duo, Phil Sharp and Pablo Santurde (Imerys Clean Energy) have moved into third behind the newly-launched leading boats Carac (Louis Duc, Alexis Loison) and Aïna Enfance et Avenir (Aymeric Chappellier, Arthur Le Vaillant). The winds were not quite as strong as expected in the cold front – around 30 rather than 40 knots. But before the front the 40ft monohulls, the smallest boats in the race  spent their time shaving the rocks, even passing through the Passage du Four and the rocks of Molène island last night to get out of the Channel. In the wake of the leaders, Eärendil stopped in Camaret to repair their staysail, and the Brazilian team, Mussulo 40 Team Angola Cables, are heading to the same port to solve their electronic problems. Esprit Scout and Gustave Roussy seemed to be following the same path but were perhaps trying to negotiate the front from a different angle. 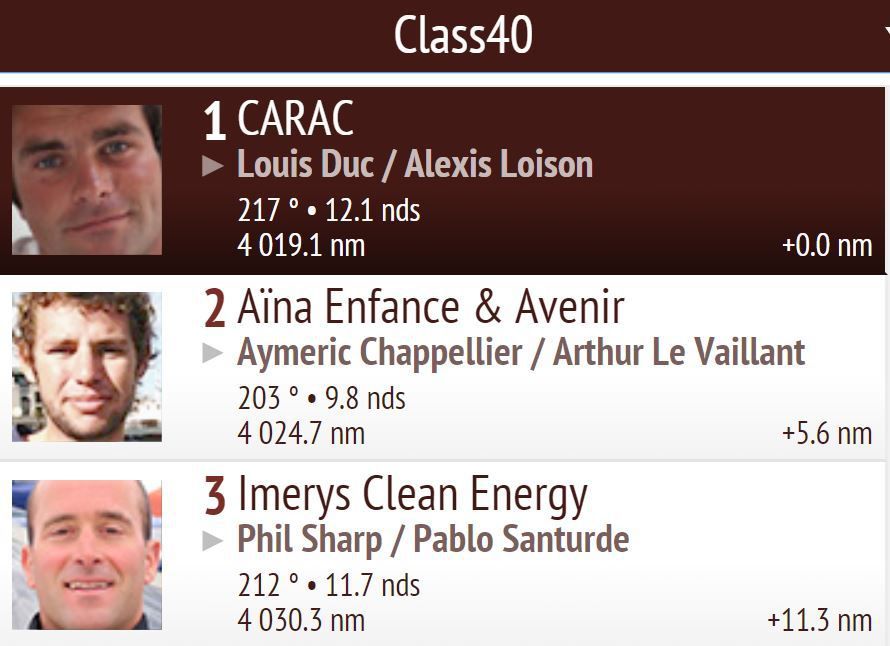 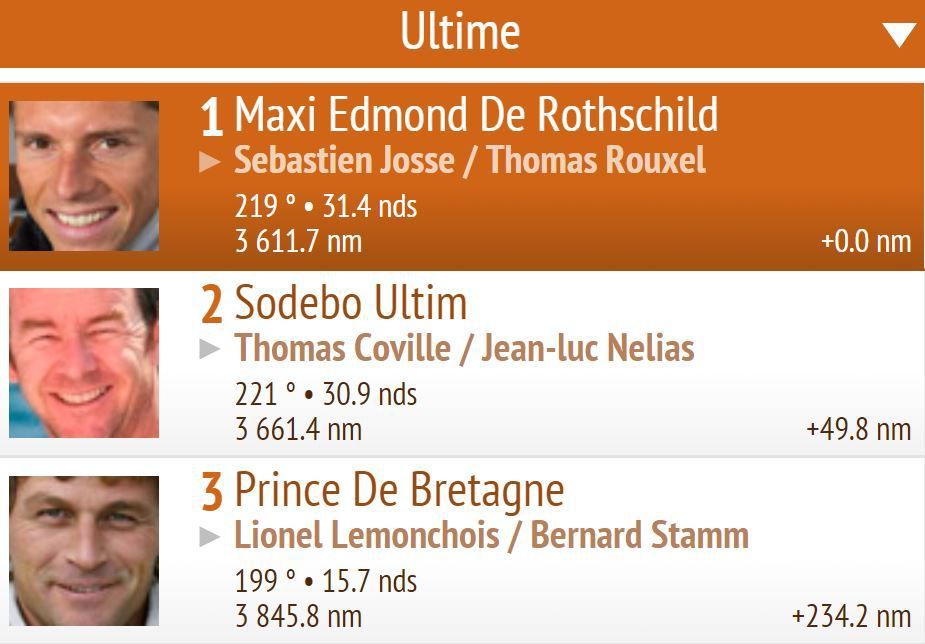 Ranking of competitors - nov 7th - 7am