Catana Group, manufacturer of catamaran brands Catana and Bali, headquartered in Canet-en- Roussillon (66), strengthens its industrial organization to adapt to its strong growth in activity. Anticipating sales growth of nearly 40%, the shipyard managed by Olivier Poncin significantly strengthens its industrial facilities, with a stake in a Tunisian subcontractor, a strengthening of its workforce and the implementation of a plan to improve the performance of its plants.

With an order book doubled compared to 2016, and already offering delivery dates for the 2018/2019 financial year, Catana Group is working to secure and develop its industrial organization.

Two years after launching the production of the charter version of its BALI 4.0 in Tunisia, at its subcontractor Haco, Catana Group has just acquired 30% of the capital of this company.

With an industrial site of 8,000 m2 and recognized know-how in the manufacture of boats and composite parts, Haco has successfully set up an efficient industrial organization that allows it to manufacture today. The BALI 4.0 charter (another set of molds being used in Marans in Charente-Maritime for the manufacture of the owner's version) as well as most of the small polyester parts of the Catana group, knowing that the Tunisian shipyard works for others leading French actors in the industry.

"Given the importance of these fabrications, this acquisition aims to first secure this outsourcing and increase the weight of decision of Catana Group in this company" said Olivier Poncin, president of the French shipyard, continuing, "Already having a large decision-making influence, given the predominance of the activity it entrusts to Haco, Catana Group can also at any time, and at its discretion, strengthen its participation to bring it 50% of the capital".

Beyond securing this subcontracting, this capital-intensive operation should also contribute to strengthening the profitability of Catana Group, as Haco has just closed its 2016/2017 financial year with an EBITDA of more than € 1 million, a profitability profile that will be significantly reinforced in future exercises.

In parallel, the group headed by Olivier Poncin continues its strategy of strengthening its workforce in France. Since the launch of its BALI development plan in 2014, Catana Group has created nearly 80 jobs in France between its Canet-en-Roussillon plant and the Marans outsourcing plant (17) and plans to create around 100 additional in the next three years.

Optimizing the performance of factories

In addition to its targeted subcontracting and the development of its workforce, Catana Group plans to increase the production of its plants by 25%, on an equivalent human and industrial perimeter, through a vast improvement plan for the performance of all sites. manufacturing.

For this, the group is accompanied by a firm specializing in Lean management, the company POP.

The located in Nantes "POP" company (Operational Piloting of Performance) is strongly referenced for having worked in many sectors of activity and has already accompanied leading companies in the nautical sector. Coupled with the high visibility offered by the current order book, this support will enable the French group to generate substantial productivity gains. 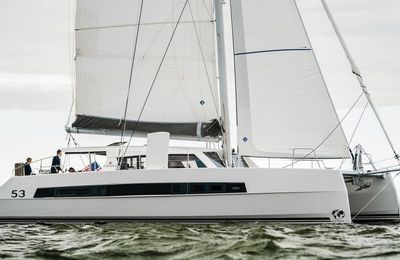