Ferretti Group presented today in Milan, at the Pirelli skyscraper, the financial results of 2018 which confirm its growth and financial solidity. The Group 2018 financial cycle is characterized by a PAT (Profit After Taxes) of 31 million euros, which confirms a stable growth in profits, with an increase of 29% compared to the previous year.

The consolidated production value rose to 669 million euros, growing by 7.5% compared to 623 million in 2017. EBITDA stands at 53 million euros. The portfolio order through December 31st 2018 was equal to 708 million euros. In addition, the Group's total assets reached € 1.14 billion, of which € 38.5 million was composed of liquid assets.

Ferretti Group announces the closing of the acquisition of Wally brand. The Group’s portfolio grows up to 8 brands confirming its positioning as the leading atelier of the international nautical market.

Alberto Galassi, CEO of Ferretti Group, commented: "A clear and elegant beauty lies even in numbers, and the 2018 fiscal year figures show us once again that making beautiful and unmistakable boats is still the best route to follow and the winning solution for success. It is increasingly clear that "winning easy" is just a slogan and that to stay at the top and grow steadily as Ferretti Group has been doing for some years, it is necessary to move fast and remain responsive in a market that is constantly changing. Our shareholders, who in the 2015-2018 four-year period invested 154 million in Research & Development and reinvested in the company all profits earned are, fortunately, the first and most certain ones about the need to never stop. 'Never change a winning team’ but, if a champion arrives let’s make an exception. That’s why this year Ferretti Group enhanced with the entry of Wally, an extraordinary brand that led the Group, with its 8 world famous brands, to boast the most qualitative and varied range of the entire Italian nautical industry.”

Going back to numbers, Galassi continued, “In the last few years we have created and presented to the world 29 new models and, from 2019 to 2021 we are aiming to produce 27 new serial models with an average length of 97.3 feet, pushing us further and further into the construction of large boats. This is possible thanks to a 2018 that consolidated the Group's position from a complete financial relaunch point of view and certified its indisputable commercial capacity. In the navigation world, in exhibitions, in marinas, according to the sector professionals and to the nautical enthusiasts, Made in Italy and Made by Ferretti Group are the most important things, thanks to a record of style and inspiration that has brought us to where we are today and will lead us to even greater goals in the near future."

Furthermore, thanks to the 64 million euro invested in industrial capacity from 2015 to 2018, expansion and renovation works were carried out by the Group's shipyards. In particular, the Super Yacht Yard in Ancona was the focus of an ambitious renovation project aimed at creating an industrial hub at the highest level of innovation, technology and excellence that extended the area to over 80,000 square meters and that by 2020 will provide the plant with 10 construction sheds, a 670-ton travel lift and a private marina with 14 berths available. 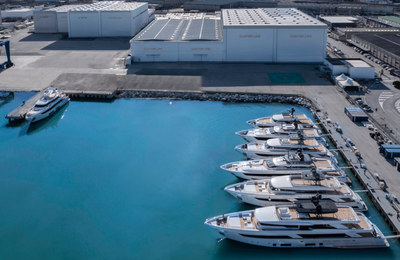