In recent days, killer whales have been attacking sailing boats off the coast of A Coruña. This misadventure happened to the happy couple of owners of Exit One, the very first Privilège 510, delivered a few weeks ago!

In other words, Iris and Volker's first transatlantic crossing began with a very unusual incident: an attack by killer whales!

On Friday evening, less than 2 miles from the coast of A Coruña, the yachtsmen, who were sailing under engine due to the ambient calm, saw a group of killer whales decided to attack them from the port side!

The skipper's first reflex is to break down the engine in order to avoid injuring the marine mammals.

Neither one, nor two, one of the males of the group begins to attack the appendages, especially the starboard rudder, on which he exerts very strong pressure, causing the 51-foot catamaran to slide sideways !

This little merry-go-round is getting worse, when the group changes tack to take an interest in the port rudder !

After a long time, the group of killer whales takes to the open sea, leaving the yachtsmen literally stunned !

Once calm has returned and the authorities have been alerted, a quick dive will reveal that the robust long-distance catamaran, built in France in Les Sables d'Olonne by the Privilège Marine shipyard (a subsidiary of the German HanseGroup), has not a single scratch.

Specialists dispatched on board took the testimony of the crew and explained this rather infrequent behaviour by the killer whales' desire to intimidate intruders, in order to protect their babies, born during the summer.

An adult killer whale can persevere up to 6 tons and could cause great damage to a sailboat, particularly to the rudders. The behaviour observed at present would therefore really result from intimidation rather than attack... 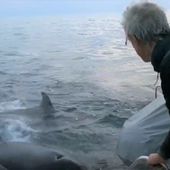