There is a change in the distribution in France of the Swedish luxury sailing yacht brand Hallberg Rassy: from now on, Hallberg-Rassy will be represented in France from Port Grimaud. The news is fresh, negotiations have just been concluded.

While several French shipyards were in the running to replace LJB Marine of La Rochelle - including two on the French Riviera - Magnus Rassy finally chose the SMN shipyard in Port Grimaud, the emblematic owner of the eponymous brand, whose headquarters and shipyard are located on the West Coast of Sweden, in Ellös, on the island of Orust, northwest of Gothenburg and a stone's throw from Marstrand, the Mecca of Nordic sailing.

Iconic brand if ever there was one, Hallberg-Rassy is the most important yacht builder in the kingdom with a turnover of 22 million euros, for 50 yachts built each year, alongside brands such as Najad-Arcona (9 million euros), Rossättra (4 million euros) and Sweden Yachts (Sweden Yachts, Malö Yachts and Regina of Vindö), whose turnover is more anecdotal.

Based in Port Grimaud, the SMN shipyard was initially born from the creation of the town-marina on the Var coast, at the very beginning by Henri Amel, then bought a few years later by private investors who have developed over the years an extremely rich range of services available to boaters.

SMN offers the whole range of services of a shipyard specialized in leisure boats, whether they are sailboats or motorboats, whether they are marine mechanics, electricity and electronics, fairing, composite or rigging, differentiating itself by the fact that the shipyard has internalized all these trades, apart from those related to sailmaking and nautical saddlery. The company has a turnover of nearly 5 million euros and employs 35 people.

SMN also offers a winter storage service on land or in a shed, mainly for motorboats with nearly 70 places available.

In parallel to these activities, SMN has its own shipchandler, and is also an agent for major brands of leasure boats, such as Solaris Yachts, Dehler, Black Pepper, Brig, Sessa Marine, Privilège Marine, Suzuki Marine and Targa, the famous 4x4 of the sea, imported into France by Snip Yachting (Ouistreham).

With the import of Hallberg Rassy into France, SMN is strengthening its product offering in a new business, knowing that given the limited number of boats built per year by the Swedish shipyard, their price positioning and the fact that the handovers take place in Sweden, in Ellös (with 50% of deliveries then made by truck and 50% of departures from Ellös), the company should mainly focus on direct sales, using, if necessary, business providers. 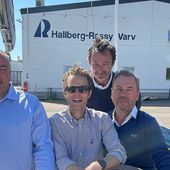