The return to "normality" in the field of events is good news in itself, but if we look at the conditions for the implementation of the restart of boat shows and other exhibitions in France, a concern is looming on the horizon that could have very concrete consequences on the first large-scale boat show scheduled for early September, the Yachting Festival...

Let's remember that since the beginning of March 2020, no major boat show has been held in Europe, with the exception of Genoa 2020, which has seen its attendance melt away, and the 2021 edition of the Majorca boat show, which will be rich in lessons learned, in terms of its attendance, although its elitist positioning is very particular.

The deconfinement N°3, currently underway in France, and the announcement of the resumption of trade shows, is excellent news for the boating industry, in a somewhat particular context: never has the demand for leasure boats, whether sailboats or motorboats, been so strong, and never has there been such a shortage of new boats, at the very beginning due to the drastic reduction in production by certain players anticipating a drop in the market, and then currently due to supply shortages in raw materials (resin), accessories and equipment.

Faced with a clientele eager for novelties and boating, the second-hand market is booming, and the waterways are regaining an activity that has not been seen for a good decade.

In this context, the return of boat shows, and first and foremost, the Yachting Festival in early September, will begin a welcome normalization, especially since the free PCR tests in France for foreigners will be a very appreciable vector of attractiveness for the country.

On closer inspection, however, a major concern is currently emerging, concerning the famous "5000 visitor gauge" which is back, and which, let's not forget, had led to the cancellation of the 2020 edition of the Cannes show!

In 2020, it was explained that the implementation of this gauge made the event impossible, despite its organization on two separate sites, Port Canto for sailing, and the Old Port for motor and yachting, and a joust as to the responsibility for the cancellation had followed, between the Prefect and the organization, who blamed each other.

As things stand now, the trade shows can take place again in France, up to 50% of their capacity, within the limit of a maximum of 5000 visitors, and under the condition of a protocol using a QR Code scan before entering the venue.

What about holding the Yachting Festival in this context, at a time when exhibitors have already paid half of their participation? 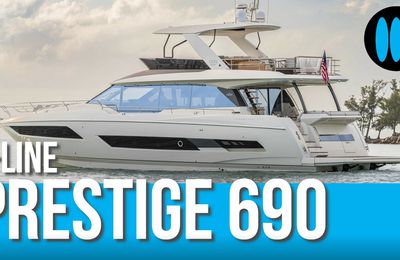