As incredible as it may seem, the French shipyard Gunboat (La Grande Motte), specialist in luxury sport catamarans (Grand Large Yachting Group), has just unveiled a new model, the Gunboat 72V, a model with a flybridge !!!! The success of the Polish shipyard Sunreef, world leader in the semi-custom luxury catamaran market and initiator of the fly models, must not be foreign to this change of strategy... Until now, 6 catamaran brands refused to compromise on the flybridge catamaran market: Gunboat, an American shipyard taken over by the French company Outremer, Outremer Yachting, HH Catamarans, Marsaudon Composites and Catana, with a newcomer, Excess Catamarans, joining them recently.

This choice was dictated by a desire for performance, pleasure at the helm, and great simplicity of maneuvering, with a low boom ideal for bringing in a mainsail or reefing.

Outremer, Gunboat, Catana and HH Catamarans were also characterized by the presence of side daggerboards, ideal for improving upwind performance.

This positioning was clearly the DNA of the Gunboat brand, an elitist brand if ever there was one, but whose niche positioning seemed to be a real brake on its development, especially when we discover the future Gunboat 72V.

This model is a semi-custom luxury catamaran with a flybridge, a hydraulic platform and on which we note.... the absence of daggerboards and even... an exterior salon on the front deck!

In short, Gunboat is coming into line, following in the footsteps of Sunreef Yachts, but without going as far as HH Catamarans with its astonishing future HH88 closed flybridge type American fishing...

When we know that Sanlorenzo also wants to enter the semi-custom luxury catamaran market - after having postponed its project by two years - we can imagine the potential of a market initiated and cleared by Sunreef and which is now positioned as a very strong alternative to the monohull sail- and motoryacht market... 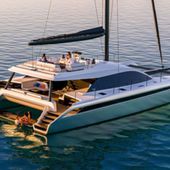