Under the aegis of its parent company, the French Bénéteau Group, the American shipyard Four Winns has just unveiled the first images of the Four Winns TH36, an outboard power catamaran that is as practical and livable as it is well designed. If there is a segment of powerboats with great potential and which until now has suffered from a notably insufficient product offer, it is indeed that of outboard catamarans, whose only player of international stature, the Chinese Aquila, sees all the production of its 28, 32 and 36-foot models monopolized by the American market.

The Bénéteau Group intends to put an end to this situation, and with the Four Winns TH36 it has revealed a unit that appears, on the first visuals unveiled, to be as elegant as it is efficient.

Its timeless elegance, the Four Winns TH36 has gone to Italy, to Garoni Desgin, a well known studio, which has notably signed the whole line of Prestige luxury motoryachts, a reference!

An Italian style that blends well with the American DNA of the brand, the Four Winns TH36 having opted for a deck plan directly inspired by the HD range of the shipyard.

To complete the picture, the naval architecture of the Four Winns TH36 comes from France, and more particularly from the Marc Lombard office in La Rochelle, one of the world's leading specialists in the world of multihulls. The brief given to Marc Lombard was to imagine an efficient, marine and sophisticated hull shape.

The result, which can be seen in the first official renderings of the Four Winns TH36, is a balanced, elegant unit that immediately stands out from the Asian style of its immediate competitor.

In terms of functionality, the Four Winns TH 36 can carry up to 15 passengers, who benefit from a classic cockpit, 2 aft bathing areas, a forward cockpit and 2 cabins each with its own bathroom!

The cockpit is protected by a sporty T-Top, perfectly integrated in the general design of the boat.

The Four Winns TH36 is available with two Mercury engines of 300 or 350 hp, or two Yamaha engines of 300 hp, both equipped with joysticks for easy maneuvering.

More information on the Four Winns TH36 to come in our next editions... 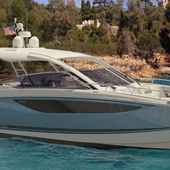 Excess 14 - a sailing boat offering sensations at the helm, with two hulls !