Boating and Yachting - When a shipyard like Jeanneau launches a brand new line of powerboats, one that has been tried in the past, there is no room for error. The all-new DB/43 looks particularly good, with a striking design and a host of features drawn from the best in the day-boat world.

Jeanneau DB/43, a star is born

A particularly striking style, the Peters and Garroni duo has created a design that is already a classic.

The boat is conceived according to an open plan, able to offer a sensation of proximity with the ocean. The sea is very close, but the wide windshield topped by a hardtop and the high bulwarks do not sacrifice protection.

It is better, with the powerful engines offered, outboard, with three Mercury Verado 350 HP and inboard, with two Volvo D6 360 HP and a top speed of 34 knots!

The hull, signed Peters, the architect of the Cap-Camarat hulls (including the big 10.5 and 12.5) should allow, if it takes the assets of its predecessors, to pass the power without stress, especially since the two types of engines are available on joysticks.

But that's not all. Where the Jeanneau DB/423 is very strong is in its aft cockpit, which has two side platforms of the kind already found on the large cap-camarat that carry one.

When deployed, they reveal a real beach club, organized around the outdoor kitchen and the saloon whose rear benches become a nice size sunpad. At the front, a second sunpad awaits those who like to laze around.

How could you not want to spend the night aboard such a boat and extend a day of anchoring in a dreamy cove?

On board the DB/43, two superb cabins await you, each with its own bathroom.

Inside, luxurious leathers, high quality upholstery, elaborate woodwork and indirect lighting are the order of the day.

This new DB/43 immediately places itself in the upper echelons of premium day boats. A Day Boat capable of welcoming its guests (12 max) for strolls, lazing around, lunch or a party at sea! Versatile, it can be transformed into a platform for lounging or swimming, or into a weekender capable of cruising from one port to another on the Riviera.

With its inboard motorization, more discreet, and the sun, it will probably behave like a real cabin cruiser able to delight its owners during weeks of coastal cruising.

Beautiful, powerful, fast, versatile and luxurious, with a marine hull and efficient navigation aids, the Jeanneau DB/43 will be a hit... 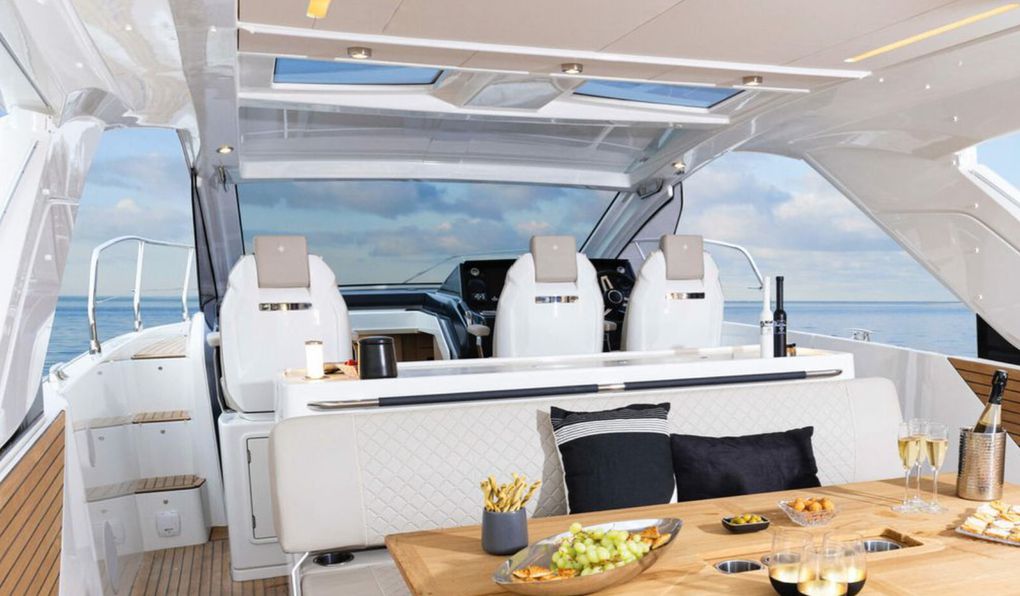