According to HanseYachts AG, the Italian shipyard would not be allowed to i.a. manufacture, promote, sell or transfer its Pardo 43 with effect in Italy, considered as having been developped with unfair methods, to the detriment of the Fjord 42! 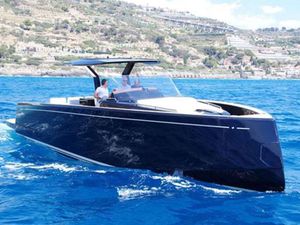 Italian Genoa Court has confirmed preliminary injunction against Cantiere del Pardo S.p.A. The Italian shipyard, well known for its sailboats sold under the Grand Soleil brand, would not be allowed to i.a. manufacture, promote, sell or transfer their Pardo 43 - considered as having been developped with unfair methods, to the detriment of the Fjord 42 - with effect in Italy.

On the 7th of March, the Court of Genoa has ruled against Cantiere del Pardo and confirmed the preliminary injunction against the imitating ship yard.

As a consequence, Cantiere del Pardo is “forbidden to further manufacture, advertise, hold, exhibit, promote, sell or transfer the Pardo 43, limited to economic relations already existing or that will be instituted in the future in the Italian territory” says the Court of Genoa".

The Court also ruled that future breaches of the order will lead to considerable penalties for any Pardo 43 that will be sold or promised for sale or promoted.

Following this decision, the German HanseYachts shipyard has announced to take all legal measures necessary in order to enforce this order.

In its decision, the Court confirms that the behavior of the Italian shipyard was unfair and thus violates the laws against unfair competition. The Court also saw strong similarities of the Pardo 43 with Fjord 42. The behavior of the losing party was held to be unfair, because a number of the features taken over in the imitative yacht were the obvious consequence of suggestions and material received from a Fjord dealer, who was contacted by the Italian ship yard in order to create a successful yacht in a short period of time.

“This court decision is a milestone for the boating industry. It is about time that the immense amount of copying stops, not only in the power boat but also in the sailing yacht sphere. The future task of the industry will be to prevent unfair copies such as the imitation of the original Fjord 42 open, in order to maintain a versatile and high quality market for customers”, says Dr. Jens Gerhardt, CEO of the HanseYachts AG to Yachting Art Magazine.

In a presse release, Cazntiere del Pardo says: "As you already know, Pardo 43 has been object of an injunction order issued by the Court of Genoa on January 16, 2018, as a result of the preliminary proceedings started by HanseYachts against Cantiere del Pardo.

First of all, we highlight that the provision in question is only temporary, subject to appeal and limited to the Italian territory. Although we respect the order, we trust that this decision will be overturned in appeal in the next few weeks, since we are sure of having behaved correctly and respecting the competition rules.

Secondly, as to the merit of the decision, the Italian Court has granted the injunction order mainly on the unfair competition for imitation, which means, according to the Italian law and jurisprudence, that the average consumer of this kind of boats might consider the Pardo 43 as a HanseYachts’ boat.

Nevertheless, the facts seems to show exactly the opposite, since we have already sold 30 boats in just six months to very experienced clients who bought Pardo 43 for his own features.

Lastly, the Italian Court with the same decision has reached the conclusion that the Community Registered Design related to the Fjord 42 should be declared null and void in the light of the existing previous boats Fjord 40 and Fjord 48, confirming that the design of Fjord 42 should be not considered – at least from a juridical point of view – new and characterizing, but simply another boat of the Fjord line.

Fabio Planamente, General Manager of Cantiere del Pardo, together with the property, represented by Marco Casadei, express their disappointment after the latest events: ““The polemics spread out after the issue of the Italian Court’s decision are rushed and risk to damage the entire nautical world. We are confident that this episode will end soon with positive outcomes for our shipyard”.