Among the 4 Bénéteau Group brands considered to have strong potential, the American Four Winns will be spoiled: it will in fact be entering a very high-growth market segment, that of outboard catamarans, a segment initiated by the Chinese-American Aquila Power Catamarans. An American brand reputed in the USA and Canada for the quality of its motor boats, Four Winns should, in the coming months, make a lot of noise in Europe, which will stand out on the market with a particularly attractive offer: a 30-35 foot catamaran powerboat, with a very successful style, as shown in the first sketch distributed by the yard.

This new market segment, initiated by the Sino-American shipyard Aquila Power Catamarans (the brand belongs to the American distributor Marine Max, which has its boats built in China, at Sino-Eagle), has delighted its builder, who is literally doing very well in North America.

The reason for this success lies in the habitability offered (huge cockpit and forward saloon, XXL cockpit), the low consumption and the ability to sleep on board in complete privacy, each hull being fitted with a cabin.

To position itself strongly in this promising market, Groupe Bénéteau has decided to choose an emblematic American brand, Four Winns, renowned for its reliability, and has dedicated this market to it !

In fact, within the French Group, Four Winns will be the only brand active on the outboard catamaran market, which should enable it to strengthen its position significantly, both in the US-Canada... and in Europe !!

To put all the trump cards in its favour, the two-hull Four Winns benefits from a very elegant style, characterized by powerful inverted bows, a bowrider deck plan (with a central passage to the forward cockpit), a helm station well protected by a sporty T-Top and a wrap-around windshield, as well as a huge aft cockpit giving access to a very large central bathing platform.

The launch of this new model should benefit from the Bénéteau Group's strike force, which will capitalize on a very stable unit at anchor, which is both efficient and economical, and offers a fairly unique habitability/hull length ratio.

A reassuring family unit from which one thing is now expected: its launch date... 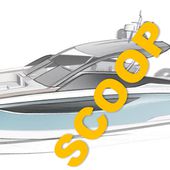