Bought out this year by French Boat Market, the White Shark brand will launch the new 240 Sport Cabin Evo in 2021. This unit is positioned in the market for U.S. sports opens, such as the Boston Whaler and Wellcraft. To design this new model, French Boat Market (06) asked French designer Jean-Jacques Coste, whose objective was to evolve a mythical model of the brand, without changing its DNA.

The White Shark boats are characterized by their tuliped hull and their integrated delphiniere. Several important changes have been applied to the 240 Sport Cabin, particularly in the transom lines.

The transom is no longer vertical, but inclined, giving a more dynamic line, and incorporates bathing decks, giving the boat a much more modern look.

In terms of layout, which the boat was lagging behind the most, the 240 SC cockpit now includes an L-shaped bench seat to starboard, as well as a "leaning post" pilot's seat, with a folding seat and galley unit.

With an overall length of 7.75 meters, the 240 Sport Cabin's hull - which is derived from the 228's - still remains under the 7-meter hull length and avoids French rights.

Below the foredeck, covered by a large sundeck, is the cabin, with double berth and separate toilet compartment. Due to the high-end positioning of the brand, a luxurious and functional layout is expected, which is usually the case on this type of boat.

An Open version of this new 24-foot and a new 26-foot model are already planned by White Shark, following the 240 SC. 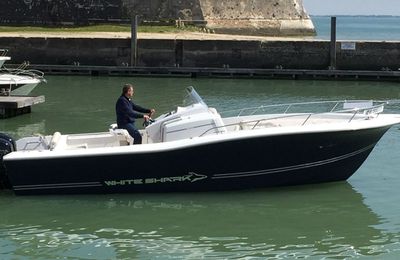