The Italian shipyard Solaris Yachts, has just completed the purchase of the French luxury yacht brand CNB from its owner, Groupe Bénéteau. This acquisition allows the Italian luxury sailboat builder Solaris Yachts to strengthen its position, while having a range of ocean-going sailboats, complementary to its own. Boating and Yachting - The rumor of negotiations between Solaris Group and Groupe Bénéteau has been particularly insistent since the end of last year, with echoes as early as October-November of the interest of two Italian shipyards in the French group's luxury yacht brand, namely Solaris Yachts and its great rival Grand Soleil.

CNB, an iconic luxury sailing brand, was Groupe Bénéteau's top-of-the-line monohull yacht offering. Last July, the French group decided to divest itself of the brand, as part of its strategic plan to reposition itself on 8 of its 12 brands, at the expense of CNB, Monte Carlo Yachts, Scarab and Glastron.

Originally, the CNB brand was specialized in One-Offs, units built individually, which very quickly seduced the market, pushing the shipyard to develop a semi-custom offer that literally hit the jackpot, with mythical units such as the Bordeaux 60, then the CNB 66 and CNB 76.

Solaris Yachts is a privately owned shipyard, founded in 1974 in Aquileia, north of the Adriatic Sea, between Venice and Trieste, specializing in semi-custom luxury yachts, and which has recently entered the motoryacht market with a range of very successful units, marketed under the brand name Solaris Power, and built on a dedicated site located in Forli.

=> Video visit of the Solaris Yachts shipyard in Aquileia

The Solaris Group employs 220 people for a turnover of 50 million euros. Well positioned in the luxury sailboat and motoryacht market, the Solaris Group is characterized by a highly efficient industrial organization, organized around three industrial sites, two dedicated to the assembly of boats, Aquileia (sail), and Forli 2 (motor) and the third, Forli 1, dedicated to the construction of hulls and the working of composites.

Among the Group's strengths are industrial processes that have nothing to envy in terms of productivity to the champion of the genre, the German Bavaria, but with a major difference, being able to achieve these performances in the field of semi-custom, thanks to a very surprising production method.

=> presentation of the Solaris Group by its president, Frederico Gambini

As part of the CNB acquisition agreements, the two current models in the range, the CNB 66 and CNB 76, will be built at the Bénéteau Montfalcone site until 2022 (Trieste), when their construction will be transferred to Solaris Yachts, while the new model expected in the coming weeks, the CNB 8X (CNB 92??), will be built directly at Solaris Yachts, which is one of the few European shipyards able to paint large vessels - it has long subcontracted Wallys - and has an XXL paint booth in Forli.

With this acquisition, a new era is opening up for CNB, which should become the offer dedicated to Blue Water Sailing, in the Solaris Yachts catalog of luxury monohulls.

Not to mention that Solaris Yachts now has a very valuable asset to build on: CNB's client portfolio... 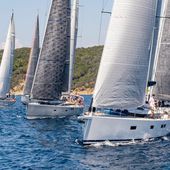