Candela, the Swedish manufacturer of electric foil boats, is on cloud nine: its latest model, the Candela C8, has just made its first flight over the water and received its 100th firm order. Candela is probably the shipyard that has the most relevant offer in the field of fast electric boats for pleasure boating, with a unique concept: to have imagined and developed boats that fly above the water, thanks to their foils, and thus allow to go relatively fast (20 knots), relatively long (50 miles), because not pushing water, and in the greatest comfort, up to 1.30m deep!

After the Candela C7, which allowed the Candela shipyard to develop the concept, the highlight of which is the flight computer - identical to that of an airplane - entirely developed in-house, the Swedish shipyard based near Stockholm has just flown the Candela C8 for the very first time, after 16 months of development, an open hull with a decked bow, with a beautiful cabin. After reaching the planned take-off speed of 16 knots, the Candela C-8 P-01 prototype took off smoothly and flew silently over the water at a cruising speed of 20 knots.

This first flight marks a great moment not only for Candela, but also for the powerboat industry, as the Candela C8 stands as the first relatively "mass-produced", emission-free powerboat.

The Swedish shipyard is aiming for excellence - they call themselves the Tesla of boating - and have set themselves the goal of offering boats that are better than their internal combustion engine competitors!

Notwithstanding the issues of electric range and the arrival of synthetic fuels (therefore non-fossil and without CO2 emissions), not to mention ethanol - Candela has clearly changed the game in the field of electric boats whose conventional hulls require huge amounts of energy, which exhausts even the largest lithium-ion batteries after only 30 to 45 minutes of intensive navigation.

By flying over the waves on computer-controlled underwater wings, Candela's boats use 80% less energy than conventional electric boats, resulting in much greater range and higher speeds on battery power alone.

What makes hydrofoils so efficient is the dramatic reduction in drag. A typical planing hull has a lift-to-fatigue ratio of 4 to 1, while the Candela C-8 has a lift advantage of 20 to 1. Cruising at 20 knots, the C-8 can go 50 nautical miles on its 44 kWh battery, which is 2-3 times longer than conventional electric outboards with 300% larger batteries!!!

On the electric boat market, Candela is clearly leading the way, with nearly 100 Candela 8 already sold, and is aiming at a rate of 400 units per year in... 2024.

At 290,000 euros per unit, the shipyard, which employs 70 engineers, aims to achieve a turnover of 120 million euros within two years, or 60% of the turnover of the French group Fountaine-Pajot...

A Tesla-like growth, for which the shipyard recently raised 24 million euros.... 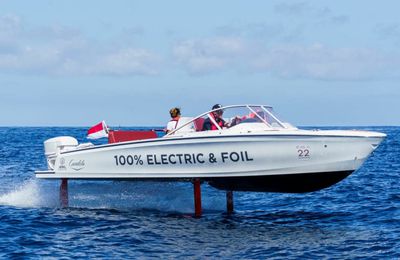