Built with Carbon Tech, this yacht has been created for an owner who likes to stand out from the crowd and finds their clearly defined and determined lifestyle reflected in this boat. The interior design by Achille Salvagni presents a mix of the elegant and the casual, while the sleek exterior lines are by Stefano Righini.

Midway between charm and technology, the Grande 25 Metri has a Carbon Tech superstructure, roll-bar, hard top and transom. The large volumes of an important yacht, with a garage for the tender and a totally separate crew circuit to offer the owner maximum privacy, don’t affect the boat’s contours, which seem light, sleek and almost sensual.

Another surprising aspect is the interior design, which gives an original twist to the living area: the typical separation of sofa and dining areas makes way for one big refined setting, decorated with great care and personality. So, when no one is dining inside, there’s much more space to enjoy in two comfy living areas. If needed, the table in front of the sofa can be raised to become a spacious dining table for eight. And for those who prefer their spaces laid out in a more traditional way, a version based on the classical approach is also available.

Achille Salvagni also accents the desire for informality by introducing lacquered surfaces in colours ranging from purple to sugar paper, skilfully weighed to establish new tenets of class and refinement, in a continuously developing style that never opts for the obvious.

The galley and helm station can be separated from the other settings by sliding doors and switchable frosted glass panels, allowing the crew to get on with their business without interfering with the lives of the owner and guests.

The four cabins are in the Lower Deck and three of them have double beds, while the crew has a cabin for the captain, a second cabin with bunk beds, and a crew mess that can be accessed from a stairway aft of the superstructure. 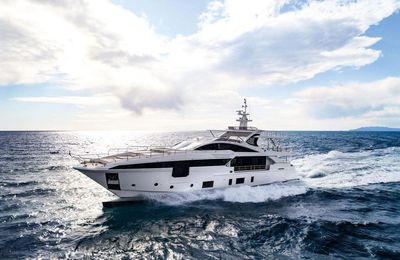