The new year has began in Düsseldorf with a spectacular shipping operation: seven luxury motor and sailing yachts are travelling to boot 2017 on a pontoon that is 110 metres long. Their temporary homes from 21. to 29. January are Hall 6 and Hall 16, where they are being presented to the admiring visitors to the trade fair.

The star among the yachts that are being transported is the Princess 30M (99 feet long). The proud Princess – which will be on show on Stand B21 in Hall 6 – from the United Kingdom is at the same time also both the biggest and, at a starting price of EUR 7.4 million, most expensive yacht that has ever been exhibited at boot.

The yachts started their trip down the Rhine in the Dutch city of Rotterdam on 2. January.

The necessary drive was provided by the push boat Catherina 4, which brought the pontoon to the Düsseldorf exhibition site jetty in somewhat longer than three days at a maximum speed of 4.7 knots (8.7 km/h). It reached its destination with its valuable cargo early on Thursday morning.

The experienced shipping professionals from the logistics company Kühne & Nagel soon arrived there and established a transport bridge from the Düsseldorf exhibition site ramp to the pontoon. The yachts were pulled onto heavy goods vehicles individually by a winch for transport to their final destinations in the exhibition halls. 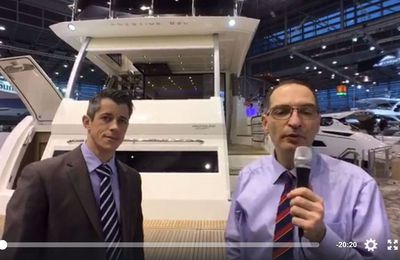